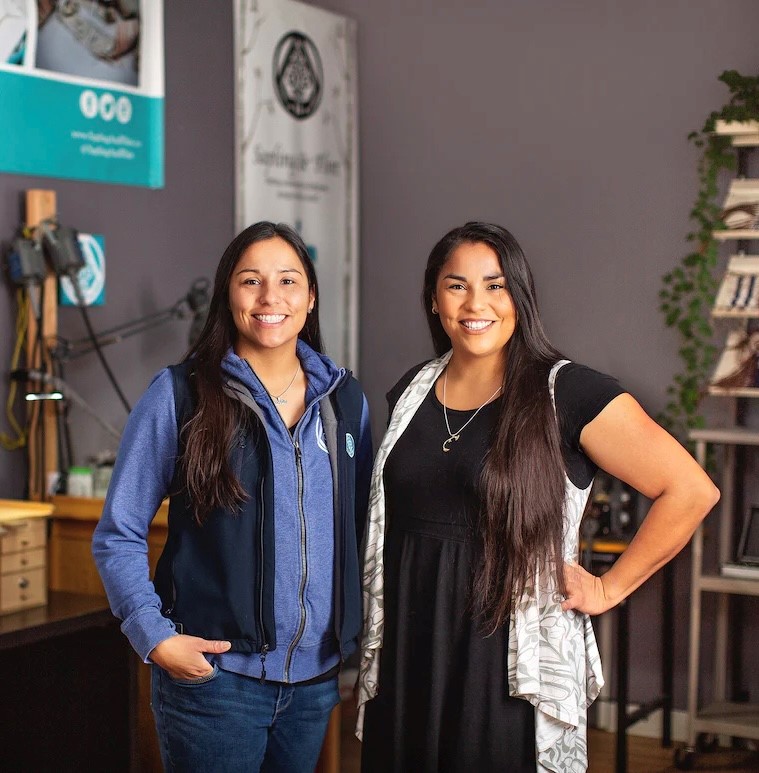 To honour Indigenous History month and National Indigenous Peoples Day on June 21, we’re highlighting the designer line Sapling & Flint! A designer brand that is a CCAB Certified Aboriginal Business and owned and operated by Mohawk Nation citizens Dakota and Jesse Brant, we are proud to feature them at Herbins.

Sapling & Flint operates fully on Six Nations of the Grand River Territory, which supports their local Indigenous economy. The sisters began their brand as a way to immerse their own children in Mohawk culture and traditions. Dakota and Jesse say that their brand meets the need to “create space for Indigenous youth to have a positive upbringing, that has accurate and positive reflections of themselves in their daily lives.” In keeping their operations local they support their community, and in selling their jewellery nation-wide they are able to share indigenous history and stories.

Teyotsihstokwáthe Dakota is a regalia maker, artist, and respected international speaker on Indigenous issues. She is Miss Indian World, as awarded at the Gathering of Nations powwow in Albuquerque, New Mexico. She is also an Inspire Laureate, holds a Master's degree in Community Planning, and is a proud volunteer firefighter with the Six Nations Fire & Emergency Services!

Yonenyà:kenht Jesse is a jeweller who specializes in traditional Indigenous materials such as Herkimer diamonds and wampum jewellery. She has a Diploma in Jewellery Methodology and learned traditional wampum cutting techniques from local indigenous cutters. Also, a Primary Care Paramedic, she has served as a Captain in the Six Nations Fire & Emergency Services and she was awarded "Most Outstanding Firefighter" by the Ontario Native Firefighters Association!

Since 2014, the sisters have designed and created their pieces themselves, crafting each piece in gold and authentic wampum and sterling silver, using materials and skills that connect them to their colonial and pre-contact ancestors. Since their inception, a portion of all their profits is donated directly to cultural revitalization projects in the Six Nations community! Additionally, 5% of their profits from wholesale silver jewellery are donated to various organizations that support Indigenous peoples and communities.

Inspired by their traditions, community, and history, Sapling & Flint craft stunning jewellery meant to “share the story of Turtle Island.”